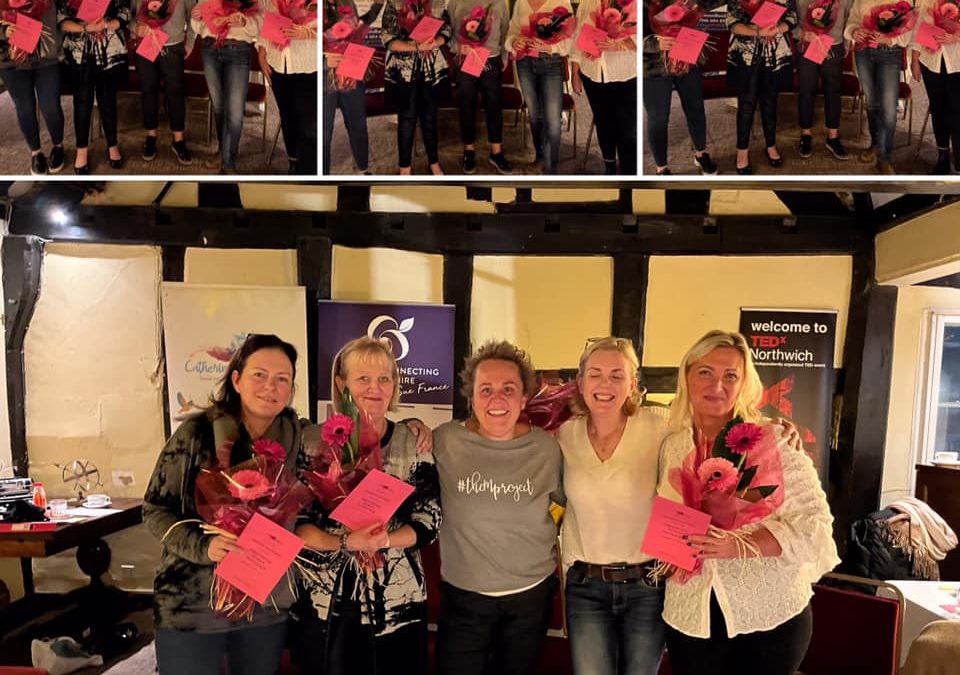 A fear of speaking in public is very real for many people and goes hand in hand with a dislike of networking. From an early age our parents tell us “Don’t speak to strangers” and this conditioning follows us into adulthood. The natural extroverts overcome this and we all know the people at networking events who love working the room and talking to everyone.
Imposter syndrome also rears its ugly head and we think people won’t want to listen to us. I train people to start off small at networking events and become such good listeners that people search them out. However, even though we can learn to love chatting and meeting new people we still have to shout louder if we want our businesses to grow.
I can teach people to do their 60 second pitches without fear and in fact at many of my events I abolish the practice all together, but for the bigger picture we need the help of an expert.
To be able to stand on a stage and tell your story in a way that encourages the audience to buy from us and believe in us is a different ball game altogether. If we want to become a celebrated expert in our field we will need to give talks. We may even want to reach a bigger audience and give a TedX talk and then the difference between a trained speaker and an untrained amateur is even more obvious.
I brought “Forward Ladies” Networking to the North West as a franchisee on the understanding from the founder that I never needed to stand up and speak in public. I managed this for a few months until one day I held a big event at the offices of 02 in Runcorn and I had to stand up on the stage and was handed a microphone. I only had to say a few words about Forward Ladies and then introduce the speaker but I froze, I couldn’t do it. What I did instead was to pick out a confident lady in the front row whom I knew loved my events. I said. “Instead of talking myself I am going to ask one of our members to describe what it’s like to be a part of my community. Up she came and talked at length but afterwards the wonderful late Eilidh Milnes came up to me and said

“ Did that lady say what you wanted to say?”

Of course she didn’t.   At that moment I knew I needed help to learn to say my truth myself. Eilidh was known as Captain Confidence and was pivotal in starting me off on the public speaking journey. She taught me that no one else could speak about my business with more passion and expertise than myself and knowing this would help me face my terror and stop delegating the task.

A few months later I joined a three day course which Catherine Sandland was holding on Public speaking called Phenomenal Women and my life was changed forever.
Since then I have spoken to hundreds at “Gift of A Wedding “events, I have spoken at a “Women in the Law” Conference and I have even spoken at an “International Women’s Day” conference in Marbella. Catherine taught us the skills and framework to deliver successful talks and I wanted to help my network and do the same for them. It was about nine years since Catherine’s “Phenomenal Woman” workshop and Ashley Costello and I managed to convince the lady to do it again. Now a TedX trainer and with even more knowledge and experience there was one proviso. This was to be a one off, never to be repeated.

Yesterday I watched Catherine and Ashley work their magic and transform the lives of 5 wonderful delegates. There were to be six (one had to cancel due to illness) .In order to even out the numbers I had to join in a little more than planned but that was an extra bonus for me!

For two intensive, mind blowing days I watched as the delegates transformed from people who spoke on stage to people who spoke on stage to people who spoke on stage incredibly well.
Debbie Turnbull who already commands the attention of the audience when she speaks to thousands about River and Sea Sense said “I have been on an amazing course for two days lead by Catherine Sandland an incredible woman who has changed my beliefs about myself and my cause RASS along with Ashley Costello my incredible Personal and Business Mentor … Sue France The Networking and Connections Queen – and a whole host of incredible ladies who’s talents were somewhat hidden until they realised they’re TRUE worth x
And Mindy Cowap agreed “I can’t wait to tell you about the last two days! It may just be the pivotal moment for us all here in The M Project Movement! I’ll pop in live tomorrow to tell you more!
For now though, I have to just say, the Phenomenal Woman workshop has taught us so many things, the way we could move, the way we could use our voice, the creation of a framework in a presentation, but most of all it is made us all look within and draw out our passions in a meaningful way. Powerful stuff!
Catherine Sandland Ashley Costello Sue France are very clever people!

I have asked hundreds of speakers to perform at my events over the years and I have heard all types, good, bad and indifferent but I know if I ask one of the five ladies from the this week to talk in the future they will be Phenomenal Women.
They laughed, they cried, all emotions were there but at the end as one voice they persuaded Catherine to hold the workshop again in March.
Ashley and I secretly cheered. Mission accomplished

This website uses cookies to improve your experience while you navigate through the website. Out of these cookies, the cookies that are categorized as necessary are stored on your browser as they are essential for the working of basic functionalities of the website. We also use third-party cookies that help us analyze and understand how you use this website. These cookies will be stored in your browser only with your consent. You also have the option to opt-out of these cookies. But opting out of some of these cookies may have an effect on your browsing experience.
Necessary Always Enabled
Necessary cookies are absolutely essential for the website to function properly. This category only includes cookies that ensures basic functionalities and security features of the website. These cookies do not store any personal information.
Non-necessary
Any cookies that may not be particularly necessary for the website to function and is used specifically to collect user personal data via analytics, ads, other embedded contents are termed as non-necessary cookies. It is mandatory to procure user consent prior to running these cookies on your website.
SAVE & ACCEPT